Paint ALL the things

Before I get started, have you seen this blog? It's delightful.
And that reminds me that I should update my blog list on the right. My interests have changed radically over the past three years, and I now read very few knitting blogs, because I can get that stuff on Ravelry. However, Google Reader (I migrated there a couple of months ago, when Bloglines announced it was shutting down, a migration that was long overdue) has brought to my attention many wonderful things that are outside the knitting world. Run-on sentence, much?
Anyway, I've been feeling, in the best possible way, rather at loose ends since I sat the exam. I won't be taking another course until summer, 2011, at the earliest, though fall is more likely. It's going to be about three months until the show moves into super-high gear, at which time I will be swamped, manic, cranky and loving every minute of it.
So, it's time to find a project. It's got to be cheap, only moderately time-consuming, and I need another hobby like I need another hole in the head. Also, deadlines and I don't get along. I thought about volunteering for something. I thought about knitting for charity (but then remembered I have many friends and loved ones to knit for - I don't need to knit for strangers who will likely not love what I make). There are, naturally, many books I want to read, and many television programs to catch up on, but that can only be done so much before my ass grows as wide as my sofa.
I was in the bedroom tonight, changing the sheets, when I glanced at the window. Or more accurately, the blinds. Which are nicotine stained, cheap and generally ugly. It occurred to me that I should get off my butt and make those curtains I've been talking about.
And then something else occurred to me.
Cue the trumpets.
I stripped (or rather, my good friend D stripped) most of the wallpaper in my study before I moved into Chez PeePee. My intention was to finish stripping the wallpaper and paint, but somehow (ha!) time has gotten away from me.
It's been four years, and it's time to have a proper study / spare bedroom.
Now, don't get me wrong, this is not the first time this thought has occurred to me. Some months ago, I borrowed a wallpaper steamer from my good friend M (it's good to have good friends) and it has been sitting in the dining room since I brought it home in August. Enough.
I am taking holidays between Giftmas and Oo Near. That would be a good time to putter around and finish stripping the wallpaper and give the walls a good wash. There may even be time to do the patching, or at least make an attempt at patching, because I suck at that sort of thing.
In my wildest fantasies (the wildest fantasies of the past hour, anyway) I can get it painted as well. Painted a bright lime green that screams cheer, good energy and inspiration.
We'll see about that.
Anyway, before pics: 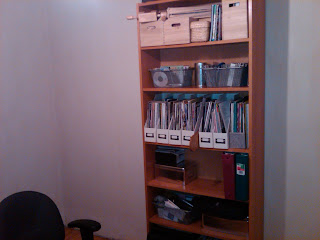 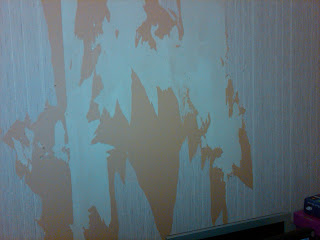 This is the view behind my desk. I can't believe, now that I think about it, that I have been looking at this for four years. Clearly, I only see what I want to see.