Knitting and jobs and boys, oh my!

I don't know where to begin.

The past six weeks or so have been pretty crazy. The technical difficulties were real - my power supply died and it took me a couple of weeks to get it replaced. After that, it's been hot (too hot to sit in this stuffy office) and I've been hunting for a job, and dating a boy, and generally trying to crawl out of the cesspool of negativity I've been wallowing in for the past eight months.

So, first the important news: the secret knitting project that kicked my butt, was almost finished on time, and did get finished in time to be sent with its owner to an important event. 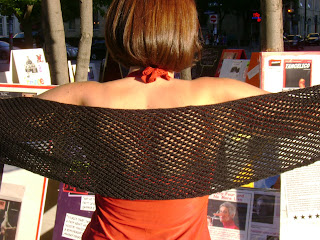 The wrap is a 30th birthday present for one of my dearest friends, N. She's attending a wedding in her home province this week, and needed a dark wrap to go with the stunning dress that she bought. We could not find anything appropriate, so I decided to make her one. I had to choose carefully. N does not wear wool (in fact, she hates wool, and I do not hold that against her, but it's difficult). N also if very trendy, and would not wear anything that was folksy or hippie-like.

So, after Icarus was done, I was flipping through the summer IK, supposedly looking for a pattern suitable for my Sea Silk, and was struck by the pattern. I figured I could shorten and widen it, find some lovely black silk, and away I would go.

It took me a month to knit the first six inches. I have never tinked and frogged so much in my life. The sad part is, IT'S A FOUR ROW PATTERN (and two of the rows are straight purling). It's my own fault. I thought it would be easy, after Icarus, and it should have been. I just could not get it through my head that it was "k2tog, yo," and not the other way around. 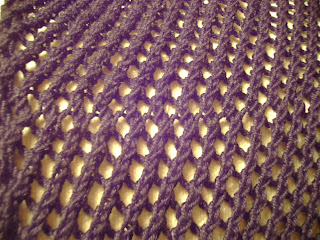 Details are as follows:

N is quite pleased. She will look stunning at the wedding.

I begin a new job on August 8, and I'm so pleased about this that I can hardly stand it. I'll save the story for another day, but I am so glad that I achieved the goal I set at the end of June and found a really good job for the beginning of August. I am going to a company that really values its employees, has a wonderful reputation, and the work I will be doing is a return to real accounting. That's the best part. I can't wait to get back to doing what I do best. Which is bang out accurate and highly analyzed financial information in a timely manner. I really, really hope that this will be as good as it seems - I want to love my job again.

For the past six weeks or so, I've been dating a man exclusively. He's a skinny little nancy-boy, totally unlike anyone I've ever dated. It's breaking the rule I made a year ago, that I would NEVER again date anyone shorter than me. But, I like him. He makes me laugh, we can talk for hours, and for a change, he's my own age. I've even met his son (something I have never done before) because if I don't screw this up (and I've come close - another story for another day) I think he will be around for a while.

That's it, for now. I need to get out of this stinking hot office, sit outside with a cup of coffee and my Ipod, on which is the latest Harry Potter. Why didn't I investigate audio books earlier? Makes knitting sooo much easier when not flipping pages at the same time.