I'm about to begin the last partial repeat of Chart 1. Believe it or not, the bulk of this shawl is done. I've haven't even used half the yarn. I think there will be plenty left over. I don't want any to be left over. So. I'm thinking about doing a extra couple chart repeats. There's just one teeny, tiny problem.


Yup, I admit it. The queen of the swatch did not prepare a swatch for this project. After all, the finished dimensions are reasonable, and how could a shawl not fit? Plus, I am a tall, broad woman. If a shawl turns out bigger-than-expected, that just makes it even more proportionate. If it's smaller, then it's a triangular scarf. Either way, I'm happy.


So, if I throw in the couple extra repeats, the remaining three charts will be that much wider, and use more yarn. If I use too much more yarn, I may run out. Then I would have to rip back all the way to chart one and remove the extra repeats. Right now, it takes me half an hour to do one row, and that amount of time is only going to increase. If I extrapolate that over the remaining hundred-or-so rows, that's quite a bit of time. I don't mind ripping back, but even my mind balks at potentially wasting that amount of knitting time.


I've put it aside for tonight, and will mull this over. Any comments are appreciated.

We have a finished object: 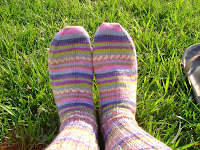 It's been a while. These socks took much longer than usual, because I'm busy with other things. However, I did a pretty fine job of making identical twins, if I do say so myself. 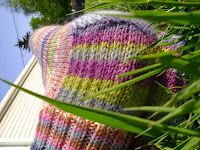 Turning the second heel was exciting, because I was about twelve inches of yarn off my starting place for the first sock. I was prepared to suck that up. I figured that I would re-jig my toe decreases to compensate. Then, I started the toe decreases at totally the wrong spot, because I was in a very dark bar, listing to a band that I will think be the next BIG THING. You can't blame a girl for getting all excited about the music and knitting ahead of herself. That turned out OK, I just frogged at the well-lit watering hole (one of the reasons I like it so much), and all was restored before the end of the night.


I also deviated from the basic sock recipe in that I grafted two sets of 10, rather than two sets of eight. I have several pairs of socks I've made for myself, and I really don't think I like a very pointy toe. My toes aren't pointy. This may be a permanent adjustment. Very exciting, eh? The things I ponder.


So, in need of a bar-and-bus sock, I sat down and figured out how to begin a sock using a toe-up method. I'm using this tutorial. 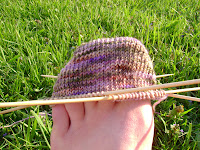 I think I messed up picking up a couple of the wraps. At any rate, I know I can do a better job. So, I'm going to wind the other skein, start again, and see if I've improved (which is pretty much a sure bet). If so, I will rip this one and start over.


I must admit, I struggled for a bit. I've only done a provisional cast-on once before, and this short-row toe was different from any other short-row work I've ever done before (it was the wrapping business that messed me up). That said, I felt pretty damn clever when all was said and done. I just need to practice. I do like how non-pointy the toe is. Also, I was pretty sure that trying it on my foot would be like Cinderella's step-sisters trying on the glass slipper. I.E., it wouldn't fit. I knit a swatch (ha! this time!), calculated gauge to fit my foot, and cast on 60 stitches. I have rather large feet. I knit 60 stitch socks for my littler friends. That felt strange. However, this Koigu is fatter than my regular sock yarn. Must remember that. 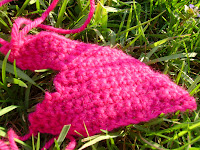 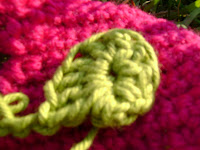 The top picture is supposed to be a square. See how it is not? That's because I didn't believe I needed to single chain up to begin the next row of single crochet. So, I just kind of started over without ripping back. The green stuff is supposed to be the class project. As you can see, I am rebelling by refusing to work on it. I must learn technique before starting a project, by SWATCHING (I realize there is burning irony here, see shawl, above).


Those of you who have met me in real life (99.95% of readers) will be familiar with me spouting off about how yarn is a better addiction than heroin. Well, I may be rethinking that. I earned this: 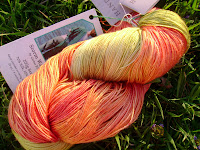 in exchange for teaching some knitting classes. Honest to dog, if I could heat it up on a spoon and smoke it, I would. It's 800 m of HandMaiden (I cannot find a link) Sea Silk in corals and greens. If I don't stick it in my bra to carry around with me permanently (not a good look for the office, though I'm tempted), I will make a stole. This must be rectangular. I have two triangular shawls (or I will, once Icarus is done), and circular shawls don't speak to me at all, so stole it is. The nicest pattern I've seen so far is the pattern included with the yarn. But, there was the pattern for sale on the lettuce knit site a while back. I heard that it's yummy too, but I can't remember the geometry of it.

OK, that makes up for the lack of knitting content over the past week or so. Let's have some flowers now: 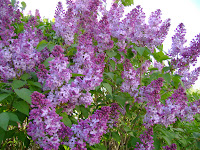 Can you believe that I hold the mortgage on those lilacs? I can't.

On Tuesday, I am taking a vacation day, renting a car and going on spending spree. I've received my enforced savings from CRA, and I, like a good Canadian, am going shopping with the proceeds. I see barbecued steaks in my future. And all my little sprouting plants in the ground. YAY!


Man news - the sushi date was lovely. More than lovely, in fact.

Since then, I have left two very pleasant messages, with no response. So, I have been "Lone Rangered" - where a stranger swoops in, makes me feel all swirly and fun, and then promptly gallops off into the sunset, never to be heard from again. I am confident that this is not my problem.

Apart from the bruising blow to my ego, this is just fine. Tall Cute Boy was just that, tall and cute. Not much else, I'm afraid. You cannot base a lasting relationship on a mutual fondness of country music, though I would have tried a third date. For my second step out of the gate in a year, not bad. The first step called tonight (he's been out of town) and we talked for half an hour (note: I HATE talking on the phone). I will let him take me out again.

And, the search for the super-tall man who understands that feminists can still wear pink and shave (and knit) continues.

Oh, and Happy Mother's Day to all moms out there. I do adore mine, and we had an excellent visit today, sitting on my ce-ment pad. I do enjoy having a grown-up relationship with her. I'm hoping it's making up for the pain-in-the-ass I was until I was oh, about 29. Which makes me think that I have much to make up for.
Posted by Misstea at 8:52 p.m.