The partners in w(h)ine were over on Friday, and we were enjoying a fabulous meal al fresco. That is normal for w(h)ine making in the summer.
Well. Edgar had some... callers, shall we say? And he went off with those hussies. I was tipsy, and busy, so I wasn't too worried.
He didn't come home Friday night, even though I was shouting his name and shaking the container with the food.
He didn't come home Saturday. Or early Sunday morning, because I got home at 2:45 AM, and was desperately hoping he was waiting for me.
He didn't come home Sunday.
His owner called Sunday evening, and I had to woman-up and give Brucie the news. I saw Brucie drive by my house at least twice looking for him. Brucie also drove by his own place (currently under-going renovations) to see if Edgar had undertaken is own Long Journey (is anyone else remembering a miserable book from Grade 7 and the even worse Disney movie that seems to evoke that title? My google-fu fails me) and actually made it across the river.
No Edgar on Monday. I was giving up hope, but woke up in the night frequently, either dreaming of him or wishing he was home (I've fallen in love with a cat. It figures).
Tuesday: I don't go home after work. Instead, I get an awesome meal and a few laughs, go to knit night. Because I didn't go home, I had the usual scramble at 10 pm: scoop the poop, make lunch, make coffee, iron something... surf for an hour, just to wind down. Wouldn't you know it, at 11 pm, far past my usual bed-time, I hear someone singing outside.
I run out into my back yard, oh-so-sexily dressed in a tank-top from 2000 and a pair of boxer shorts that used to belong to my ex-husband. In 1999 (I have no excuses. He only wore said boxer shorts once, and I find them comfy).
It's my dear sweet Edgar.
He doesn't want to come inside, because Parker has his head out the door and is already hissing, but I scoop him up, tell him I loved him and missed him. He ate lots and lots... and disappeared to the basement.
I phone Brucie - who was just heading out to cruise my neighbourhood again. He's relieved, but not really surprised. Apparently Edgar can be an asshole (That's no surprise to me: every male I've ever fallen in love with has been an asshole. Now, I'm prey to inter species assholes).
My own cats ignore me all night, because they are mad that the interloper is back again, but I don't care: my house is full; everyone is home. It's the best I've slept since Thursday.
I'm going to have a hard time giving him up, when it's time for him to go home. We spent three hours outside tonight: we watered the garden, knitted, and listened to an amazing audio book: 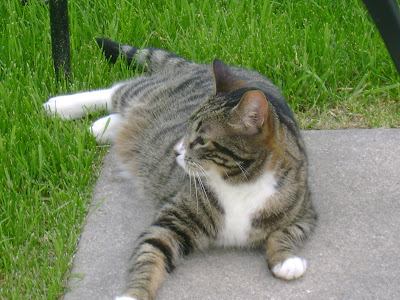 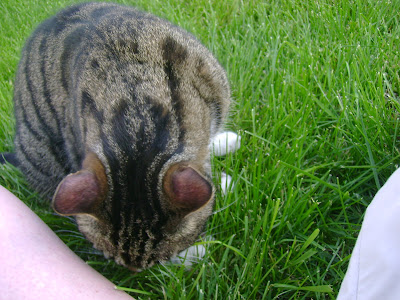 Aww, what a cutie! I'm glad he came home!

Is the movie you're thinking of Homeward Bound?