Sheesh, gotta get back at this blogging thing.

Well, Edgar has settled in, a little. There's still an awful lot of hissing, but I took a lot of hope from this moment: 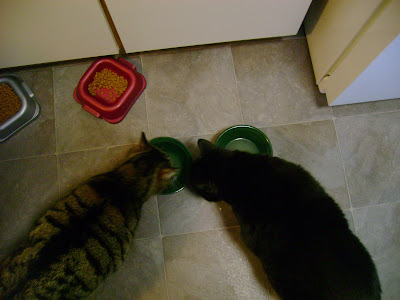 It appears that tuna juice is a great community builder.

That said, the living room smells like pee. The cleaning service is due tomorrow, and I purchased a special odor removing cleaner. I've left the cleaners a note asking them to use it instead of whatever it is they use.

And, there was an appalling fight earlier this week, just as I was applying my make-up and getting ready to go to work. Poor Edgar was dripping blood, but seems none the worse for it now (also, I was late for work, because I needed to clean it up and make sure that murder wasn't going to be committed).

I was taking a much-needed nap on Sunday. My two boys were in bed with me, as they usually are. Edgar sat in the doorway and looked at us longingly. I felt bad for the poor wee bugger, and since then I've been sure to give him lots of cuddles. And yes, I have broken my own rule. He is allowed to go outside, but only when it's nice enough for me to actually be outside or I am not doing much and therefore can hang around the kitchen window and watch for him.

And speaking of outside, I highly recommend allowing a five-year-old and a three-year-old to pick your flowers: 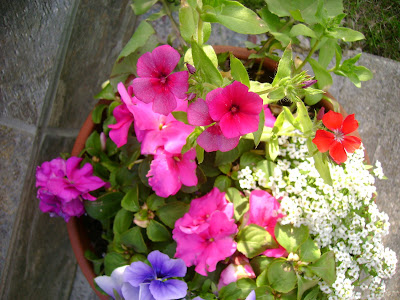 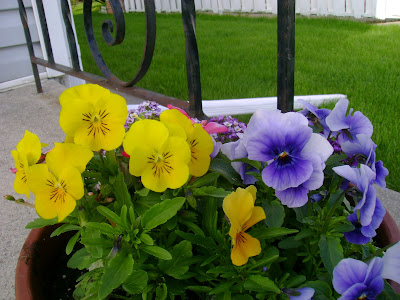 Other than the impatiens, I don't have a hot clue what any of my flowers are, but they are thriving in the front, which is rather shady, and in the back, which is a huge, sunny, heat vortex.
I'm impressed.
And one more garden thing: 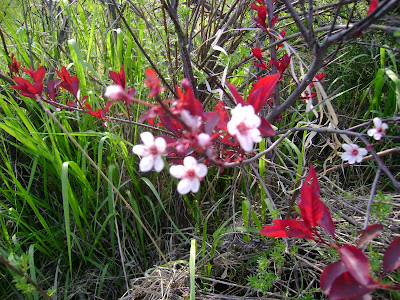 I have this thing sticking out of the south-end of my hedge, right before the potentilla. I think it's mostly dead. I didn't know until this evening that it blooms, and that it is gorgeous. When I rip out that gawd-awful mess, I'm saving that tree. Or whatever it is.
Wait for it... there's knitting content. I finished this sock at work today. I started it a year ago. 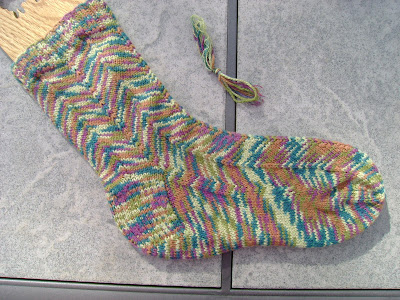 The wee bit of yarn is what is left-over from the 50 gram ball. It's about 24 inches of yarn. Couldn't have done that better if I tried. Of course, I grafted two sets of 22 instead of two sets of 14. But still, it will fit someone. Now to do the second sock. Hopefully this one will take me less than a year.