A while ago, I agreed to look after a drinking buddy's cat for a month.
I was hoping that said buddy was as drunk as I was and would therefore promptly forget (and he should have, I saw his bar tab - it more than quadrupled mine, and I was drunk!).
Sadly, though, he did not, and since I am a woman of my word, here's Edgar: 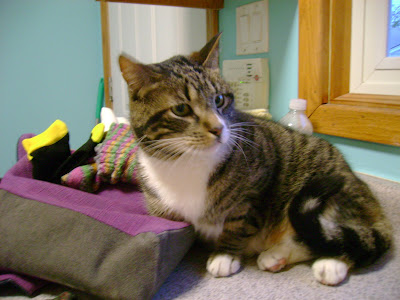 He's actually really adorable. He's a dark tabby, domestic short hair, about 11 years old. He looks quite bulky, but he's just rather large, lean and fit. A really nice-looking cat.
But chatty. I've never had a cat that sings at night. Edgar sings. And bless him, he's sweet, but he can't carry a tune in a bucket. Parker isn't a fan either, so I'm also interrupted three or four times a night by a big fight.
Scout is too old to be bothered. He just shoots Edgar dirty looks and sleeps on my bed.
It's been two days now, and Edgar is sitting on my desk right now. After allowing me to cuddle him for a bit, he wandered up there.
Here's the real problem (other than the singing). He smells. He smells poopy. I know Edgar is used to spending lots of time outside (I do not believe in letting pets wander, so Edgar will be staying inside, whether he likes it or not. All signs point to not liking it). Since he may not be used to a litter box, I wonder if there are any...surprises waiting for me.
I'll let you know if I smell poop when I am not within two feet of (a) Edgar or (b) the litter box. That will answer my question.

aww he's such a cutie though :)