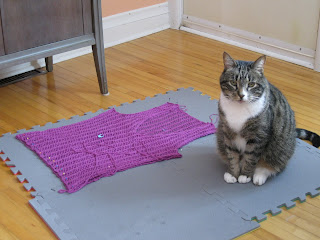 Edgar had to help me block my vest pieces this morning. He especially likes to chase the tape measure.
After knitting four projects during the holidays, it's been kind of a bummer to work on one little project and have it take two weeks. Of course, not having 24 hours a day to knit had something to do with it, but...
Well.
This pattern sucks.
It's not difficult, or even time consuming, and the finished vest is quite cute, otherwise I never would have persevered. But, this is the most poorly written and edited pattern I've ever come across. So much so that zero was typed as O (as in upper-case o) and there was ranDom capitAliZation. Furthermore, the instructions for the armhole decreases leaves a lot open to interpretation. To maintain pattern consistency, I totally had to fake it. I had to do the same for the v-neck as well.
I've heard similar things about other patterns this company has published, so I'm not really surprised. But if it were my name or company associated with this, I would be embarrassed. Especially since it's a pdf file. Not exactly hard to fix.
I am so excited about having this done and moving on to the next project. And if the damn vest doesn't fit after struggling with it for two weeks, I'm going to cut a bitch.
Posted by Misstea at 1:12 p.m.

Labels: Knitting for me