Breaking out of my comfort zone

I've stated, many times, that I am no cook.
But, I really enjoy eating.
With a limited budget, can you see the conflict here?
I tend to eat out rarely, and when I do, it's either something super-cheap, or a real splurge.
At home, I have the same thing for breakfast, every day. Lunch is a salad and left-overs from the Sunday night casserole. Dinners are... grilled chicken and veggies, meatloaf and veggies, or pork chops and veggies.
I eat well, but it's rather limited.
I've gotten tired of tuna casserole, chicken and veggie stir-fry and spaghetti.
So, when a recipe appeared on a Ravelry group (what can't Ravelry provide?) that looked easy and interesting, I printed it out and took the bus to the shop.
It was the best meal I'd had in months, and I enjoyed it more with each container of left-overs. That was a week ago, and I made it again last night.
I present to you: 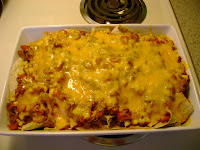 Enchiladas. Really damn good, even though I used flour tortillas instead of corn. And way less cheese than the recipe called for.
I'm going to try cooking new things more often. And maybe, if you are lucky, I will bring more than booze to the next potluck.
Posted by Misstea at 5:39 p.m.

They look great! If I weren't on a detox diet, I'd make me some.

If you want corn tortillas, try Dinos on Notre Dame Ave (almost corner with Isabelle). Also, across from Dinos is a little store that sells them too (I prefer this place because they sell CT Foods tortillas, which are better than the Del Pueblo tortillas from Dinos).

If you like enchilladas, you should try chilaquiles. Same basic concept: tortillas (but in chips), salsa, chicken, cheese and cream.

Detox what? Oh, you poor thing.

I've noted the locations, and I will stop and look for corn tortillas. I can only think that will make the experience better. Thanks for the advice (and... why didn't I think to ask you first? I'm kind of slow).