That song was the B-side on my 45 of Summer Nights from Grease. It was the dance scene, just before Danny walks in with his skanky date. Love it (yes, I'm old enough to have caught the tail-end of records. I also have a 45 of Flashdance (What a Feeling) by Irene Cara and Down Under from Men at Work. Still love both those songs as well).
Anyway, I’m taking a break from de-cluttering and organizing the Basement of Doom, ™ and instead, having a stab at another project that’s been bothering me (Yet another exciting Saturday night, that’s for sure).

Yup, I’m tidying up the stash, attempting to corral it into one room, and sort through the scraps. I don’t think I have ever thrown out a scrap of yarn or a ball band. I found an envelope of ball bands and scraps from 15 years ago (now, if I could only find the photos, because I know I have those, too).

Sheesh. I know I do not need the three meters of alpaca left over from my nieces’ first Christmas sweaters (especially since I have a whole extra skein), but somehow, I cannot bring myself to throw it in the garbage.

Then there’s the half-completed fingerless glove from some leftover Freedom Spirit. I’m not sure I even see the point of fingerless gloves, but it seemed to be all the rage, and I had enough yarn.

Also in the pile is a nearly completed sock (only about the fourth or so pair I ever started). I broke a needle (2 mm Ebay needles from Hong Kong) when I was flying back from Toronto a couple years ago, and it’s been sitting there, in a baggie, ever since.

I could go on, but instead, I’ll just post some photos. 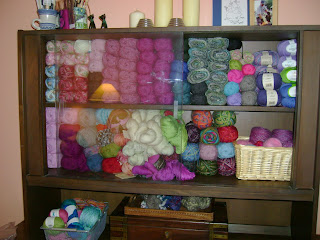 The tidy part of the stash. Granny's china is still in the basement, and is likely to remain there until I knit some of this stuff up. No real order, except 50 g balls / skeins are on the top shelf and 100 g balls / skeins are on the bottom. The wicker basket is laceweight. The metal basket is odds and ends, mostly sock yarn. Note the handspun (mine!) on the tray. It's sucktastic, but I love it. 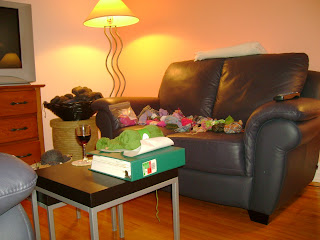 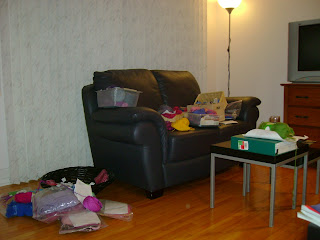 Works in progress, loosely. Some of this stuff has been in progress since 2003. 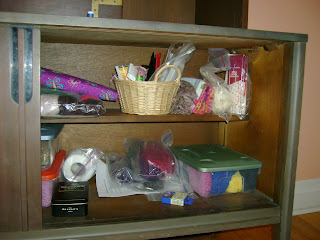 Needles, ball bands, more scraps. Really. How much china could I get into this thing if I got rid of all the crap? I've got some really nice china. And pottery.

It took me three hours today to buy some groceries and other miscellaneous things (including camera batteries to take the above photos) and pick up two prescriptions. I'd really like to make Christmas just another long weekend. That way the stores would only be insane for the week prior, not two freaking months.

Good lord girl. You have enough stash to provide our city with another great LYS :) I love it!

ooooooh look at that!
Yesterday was insane as far as getting anywhere to do anything. Took the boys 40 minutes of waiting for the bus last night after the parade. At least they were smart enough to not take the car!
About the sock yarn blanket...
Do it!!!
no offense to Noricum! Having spent a lovely afternoon on your couch, I think your livingroom would love to be graced with a funky blanket like that!

Oh and having smooshed your homespun between my hands... It is gorgeous!
I love it too!