Yesterday was indeed a lovely day. I went for that walk, and I was so warm when I got back that I stood outside, in my shirtsleeves and had a beer. It was lovely, and a very pleasant treat considering it's only the end of March.


My yard needs tons of work, and I am now regretting not doing any yard work last fall. Where the snow has melted, my lawn looks terrible. I will take some pictures today or tomorrow. I have big dreams for the yard, and the cost keeps going up. But, there's no price tag on dreams, so I can dream all I want. Reality will tell.


Now for the knitting.


I did get more done on MW's socks, but not enough to warrant a picture. Instead, I will talk about another sock.

I have this to show for my efforts over the past week or so as well: 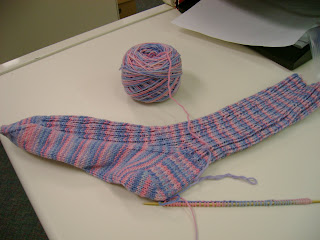 This is Posh Yarn's Lucia (the second photo on their site), purchased last November in Toronto at Lettuce Knit. It is amazing yarn, and I adore the colours. I can't tell you how good it feels in my hands, how sproingy and soft it is. I have been admiring it all winter, and, to be honest, I didn't really want to knit it. If I knit it, it would be over, and then I couldn't dream about it any more (I know how nice it is to knit because I had another skein in a different colourway, and I knit that over Christmas). It's difficult to get more - notice that everything on their website is sold out? But, I was feeling springy a month or so ago, and I started winding it up. This is what I got: 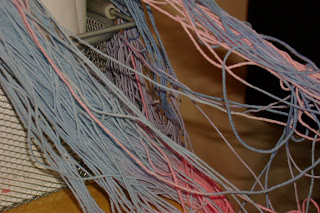 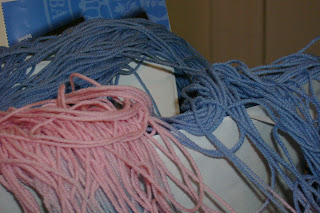 Yup, a dog's breakfast. I didn't even take pictures of the worst of it. I cut it twice, and it took me two days, sitting on the couch untangling this mess. I was rather disgusted with myself, but I also realized that prolonged the fondling of the yarn. Perhaps I'm not stupid after all. Don't answer that.


So, I have made a delightful sock, for me this time. I used the basic sock recipe, but ribbed all the way down the leg and on the top of the foot. Not as annoying as I thought it would be. I had originally started in stockingette, but the pooling was horrible and completely detracted from the yumminess, so, frog it was. It was only about an hour's work so, that wasn't too bad.


I will cast on the second sock tonight, and that will be my at-work sock, and I will keep MW's sock's for the bus. I don't want her to see her socks at all.

You will see in the first picture that I had already cast on for the second. That has been ripped. I was practising my long-tail cast on method, which I taught myself this weekend using this tutorial. Naturally, my tail wasn't long enough (that will take some practise), so it had to go. I will use my regular method of casting on (cable cast on over two needles) for the second sock, and then practise some more. Now that I know what is happening, a long-tail cast on is quite smart looking. Before, whenever I tried to cast on one-handed using some technique that came out of my head, it looked floppy and loose. Not at all tidy, and I treasure tidiness above all things.

Which means it's time to attack my chores for tonight - bathroom! I don't know who sheds more, me or the cats.

Coming soon: other things. I do knit more than socks.
Posted by Misstea at 6:58 p.m.