I made my annual trek to pick up my books tonight.

Had an interesting experience. Well, to me, anyway (Warning! Boredom ahead!). I was standing at the bus stop, waiting patiently in the dark. I wasn't too worried when a bus went by without stopping. Then a second bus flew.... no wait, it stopped, it jumped a lane of traffic to pick me up. The driver said that she had never picked anyone up at that stop before. This is the strange part: I was directly across the street from the organization I take courses from. Now, lectures are held off-site, so it doesn't surprise me that there isn't a huge crew getting off and on there every night, but to have never stopped? Evening book pick-up is one night a week. There should have been at least a couple others. Does that mean the thousands of other students in this program have cars? That is shocking. And appalling.

Anyway, this is what I got: 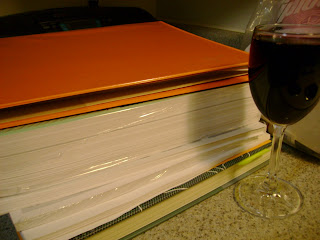 Honking big pile of paper. Wine glass included for scale. And to give me some determination. And inspiration. CD's of programming languages not shown.

Not fun stuff - two courses worth of material, which should take me through June. Plus, there's probably an equal amount going to be printed off the Internet. I read the introduction to my first textbook as I was killing time before going to Knit Night. It's going to be a looong winter.

I have ranted earlier about this program, which for obvious reasons I am reluctant to name, but my rage has not subsided at all. I managed to get onto the website where all the educational stuff is, and it's the most horribly designed space I have ever seen. No improvement whatsoever over its predecessor. Perhaps I am spoiled because of the beauty and simplicity that is Ravelry, but I feel another hostile letter coming on...

My mother told me to suck it up. She wants to see my picture in the newspaper when I am done. Apparently, that's all that matters. I wish I thought of it at the time, I should have told her if she wanted to see me in the paper, I could just commit a terrible crime and show up in the "10 most wanted" section. That certainly would be easier.

So, after the burden of carrying those books around and becoming completely discouraged about the amount of studying I have to do, I did not work on Mini B's sweater tonight (I was hoping to do some math on it at work today, but I actually had real work to do). Instead, I consoled myself with a ball of sock yarn and a set of 2.25 mm needles, a size that is not currently in my arsenal. I got the ribbing of a basic sock done in between bouts of laughter. It was a good night. 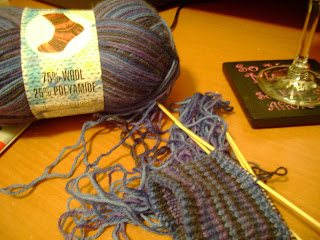 Sweet, simple socks, how I do I love thee? I'll count the ways later.

Tomorrow will not be a good night. It's my first lecture, and I am missing a Stitch 'n Bitch to go. If the lecture sucks, I'm totally downloading the audio lectures and bailing. And I fully intend to knit through the entire thing. I've got a basic sock started just for the occasion.
Posted by Misstea at 10:26 p.m.