Algebra is your friend

I decided that the 56 stitches called for in the pattern weren't enough. Especially since I'm substituting yarn and needles.
So, this is what I did - I counted the number of stitches in the pattern repeat and the border repeat. Figured out a number that would evenly divide into both of them. The result? 86 stitches and eight pattern repeats instead of five. I'll get much closer to the finished width of 23" when I block, and I will be a happy woman. 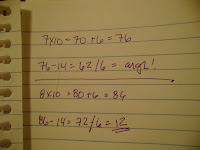 I'm loving this yarn so much that I knitted lace at the pub last night. It's a simple pattern, and the light was fairly good. Strangely, I get fewer rude comments when I am not knitting something that is vaguely penis-shaped. 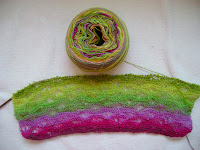 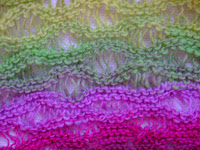 It's very simple, and rather intuitive, but I am loving the result. The beauty of Noro is the transition between colours, seeing where the slubs will appear in the fabric and the truly unique results.

Speaking of pub-knitting, Ed the plumber was wearing a jacket and tie. I did not recognize him with out his ball cap. Of course, I didn't tell him that he looked nice. That would never do.

Neil the Irishman was there, quite nervous because this guy was buying him drinks. I told him he was safe from unwanted advances. And when I said hello, he didn't even look me in the eye. I wonder what Rodney the railroad guy said about me. Rodney and I don't get along.

All in all, not a very exciting night. I walked home, and was in the house by eight. Rock and roll party queen, eh?

I think people shouldn't be afraid of math.