Deliver me from knicknacks

Tomorrow, I'm going to my first ever yarn swap. I am quite excited about this, as I am going to meet some people that I only know from teh innernets.


In order to do this, I had to find some yarn to swap.


I apologize in advance, folks. I sincerely doubt there is a natural fibre in the lot.

While I was downstairs tonight, doing a load of laundry and cleaning the litter box, I went searching through the sea of boxes and came up with this: 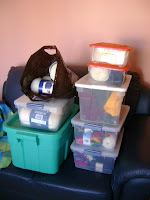 And this is only part of it, I'm sure. To get more, I risked doing myself an injury.

It was quite the walk down memory lane. I found these: 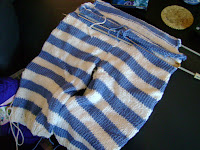 The child these baby-sized overalls were intended for is almost ten. Whoops. 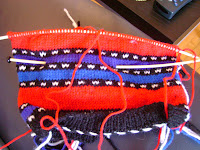 These are leftovers from an identical baby outfit I made, and the owner is now... twelve? I think I was making it on spec. The needles were my grandmothers. She died in 1977, and she was a Knitter. I have lost her needle case and most of the other needles that were passed on to me. I think the case inadvertently got packed in a box of stuff that belonged to my ex-husband. I asked him to return them to me, but I haven't heard from him in an official capacity since. Moving on... 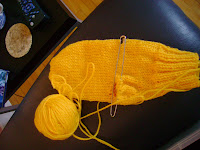 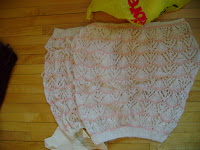 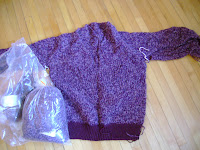 These are sweaters, not knitted by me. These were given to me ten years ago by a colleague from my first, real, grown up job. Her mother was a Knitter, and none of her children caught the bug. So, I got her works in progress, and her yarn winder. The yarn winder that I use all the time. I didn't know what it was until I started reading the Yarn Harlot's blog and figured out how to deal with yarn that didn't come in a ball. I'm a little bit slow, sometimes.

So without pausing to think about what I was doing, I grabbed a couple bags, and started shovelling. That's how purging is done best. Don't stop to think. The results: 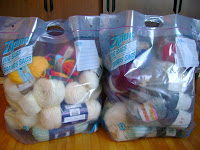 To the swap (I cleverly chose bags with handles, easier for the bus, don't you know). 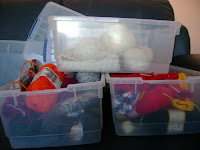 Stuff I'm keeping. Mostly scraps, the unfinished projects (not the inherited ones - those went in the garbage), and a bunch of truly irreplaceable yarn, whose story I will tell another day. If ever.

I am not keeping those sweaters, and I'm pretty sure no one else wants them. Sorry H, it's time to be realistic. I still am flattered that you thought of me. 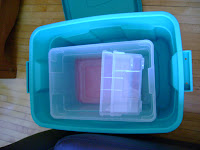 The empty containers. I am NOT going to fill them up again.

I made the mistake of opening a few boxes that I knew didn't contain yarn. Eyeyeye... I have kept everything I have been given in the past fifteen years. And everything I have purchased. Man, I had some really bad taste, back then. And, I was really sentimental. Sigh. I will get to it. Someday.