That's right, I POWN'd it.
I have a friend, and I thought that her birthday was at the end of January. Then I figured out that her birthday is tomorrow.
Shhhiiit.
So, what did I do? I speed-knit a pair of socks. I worked on them very diligently for a week, and even knit several inches successfully, in a dark bar, under the influence of several beer. It was going well, until I counted my stitches an inch after finishing the second gusset. Three extra. Unacceptable. 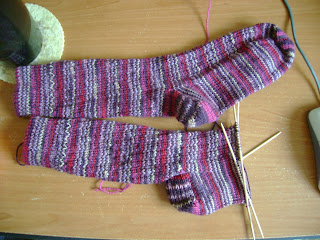 So, with three hours to go before catching the bus to meet her for coffee, I ripped: 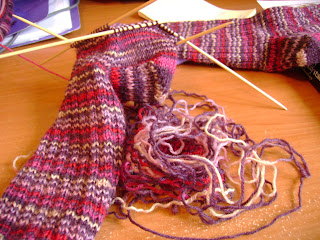 I finished those socks in Starbucks, and presented them to her. I was very cool, and never even dropped a hint that they were for her, as I was working on them. 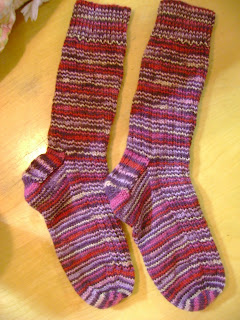 I'm not the Supreme Sock Goddess for nothing, doncha know.
(P.S. Wash them before you wear them - I tried to keep the cats away, but who knows what they do when I am sleeping).
(P.P.S. The pizza and beer was awesome! Let's do that again.)
Posted by Misstea at 9:37 p.m.

Yes, lets do that again.
Thanks again for the socks, the drink, the companionship, the pizza and the wonderful silences.
I may be older, but I'll allow that you are a smidgen wiser.
Love you.

I love the socks!
...which is the actual color, the first pic. or the others?
Amanda

If I buy you beer and pizza, will you make me a pair of socks? Such a nice gift, thoughtful and personal. You two are really good friends, which is sometimes hard to find nowadays.