What a sucktastic day.

It started out OK, but in the afternoon, it all went downhill. I started working on my assignment, only to discover that apparently, I know nothing about IT strategic decision-making (no big surprise there, but I thought I would at least be able to bull-shit about something).

Then I discovered that the online discussion that I thought began next week actually begins tomorrow. There are all ready 25 posts, and I haven't even read the material.

But wait! It gets better. I left the office at 5:40, intending to catch the 5:50 bus downtown. Plenty of time. I was standing at the light, waiting to cross, at 5:46, when the bus went flying down the street. Didn't even have a chance to wave (not that the driver would have seen me).

The thing that chaps my ass is that the website, which I shut down at about 5:38, said nothing about a delay. Also, if I had been walking, I would have been where I wanted to be on time, instead of just getting downtown.

From downtown, I walked, because there were no buses in sight, and my feet hadn't even barely begun to thaw. A bus stopped, just as I was crossing the street where I would have gotten off (I resisted the urge to flip the driver the bird. 'Cuz I'm nice that way.)

That's right, in Winnipeg, where wind chills regularly hit below 40 degrees C, one is better off walking.

You can bet your bottom dollar that I will be blasting the transit supervisor when my complaint call is returned.

So, when I finally got to knit night, I indulged in some yarn therapy. Two sweaters worth of Malabrigo worsted (in Strawberry Fields) and Manos. Clearly, I need the warm clothing, if I am going to continue being environmentally conscious and, well, cheap. 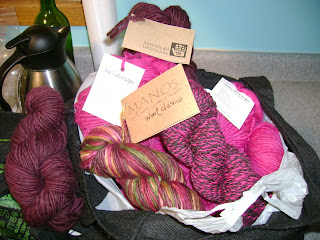 Screw you, Winnipeg Transit! I'm going to be at home, knitting, until spring, and then I will ride my bike!
Posted by Misstea at 10:14 p.m.

oh me oh my. did WW get more malabrigo colours in? last time i checked there were just 3: fuchsia, purple magic, & indigo. of which i took home 1 of each :)