You'd think I was picking my nose

Last night, during my lecture (knit night peeps, how I miss you, all ready), I disagreed with the lecturer and spent a good five minutes eloquently arguing (why can't I be eloquent during exams? It's one of the mysteries of the universe) that I thought standard 2500 of the Institute of Internal Auditors was not the horrendous waste of resources and time he thought it was.
I failed to convince him, but he agreed that my points did have merit, and were thoughtfully expressed.
For the next few minutes, I was the student that he made eye contact with as he talked (You've heard that, right? When public speaking, make eye contact with someone, and in a large crowd, preferably lots of someones).
Well, I had forgotten to keep my hands below the table, and he stopped in mid-sentence to say, "ARE YOU KNITTING?"
I looked around, and said to the class, "Yes."
He stumbled and mumbled for a few minutes about how he'd never seen that before in his classes.
Well, he's going to see a lot more of it over the next eight weeks. It's either that or nap.
Now, I know you are curious to know what was I working on: 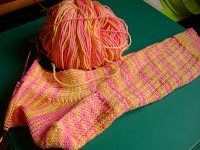