Have you heard about Flat Stanley? It's a story about a kid who gets squished, somehow, and realizes that he can fit into an envelope, and decides to travel the world.

I don't know this story (I remember a story about sentient brown wrapping paper), but when one of my Ravelry peeps put the call out for destinations, I responded. Here's a diary of how Flat Stanley and I spent our Saturday (frankly, it was nice to have company).

Flat Stanley was disgustingly under-dressed, but Saturday was a nice day - only -16C, with the wind chill making it -33C. That's the nicest day we've had for a week, here in WinterPeg.

We started off at Portage and Main, a well-known landmark. It is the windiest corner, well, anywhere as far as I know. What makes it special is that this corner was immortalized in a song (Prairie Wind) written by Randy Bachman and performed by Neil Young (there's sound, so be warned when you click those links): 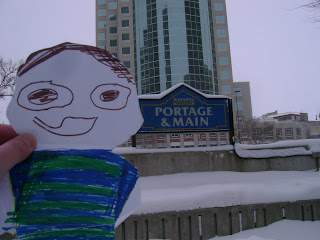 And as you can see, it was windy. 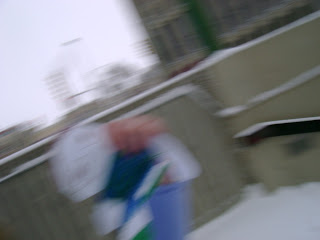 Stanley was unimpressed that this famous intersection is not pedestrian-friendly. We had to go underground to cross the street.

Then Stanley decided that he was under-caffeinated, so we stopped at the Canadian landmark that is on every god-damn corner, and got ourselves a coffee. 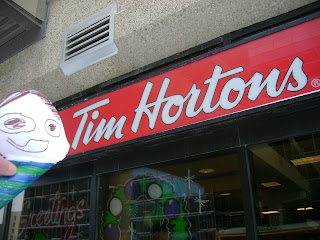 I took pity on poor Stanley, and we spent a few moments indoors. We checked out the statue of Timothy Eaton (and rubbed his toe for good luck, as is tradition): 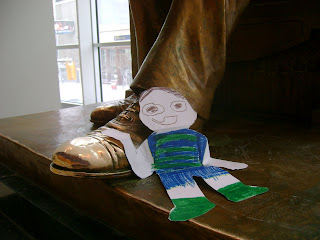 Sadly, though, it was back outdoors, down Memorial Boulevard to have his photo taken in front of the Manitoba Legislative Building. He very kindly included me in the photo: 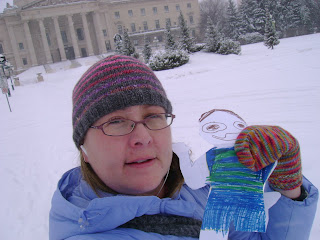 At that point, I looked at my watch, and realized we were going to be late for my shift at the yarn shop. So, we hoofed it down the road.

Stanley was not impressed with what a country girl like me considers a nice stroll: 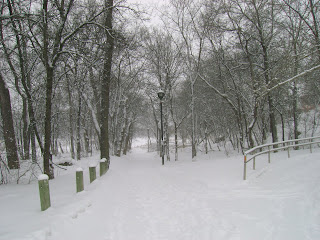 He was all “fuck that shit, I’m not getting out of this bag, lady, you enjoy yourself.” So, I did: 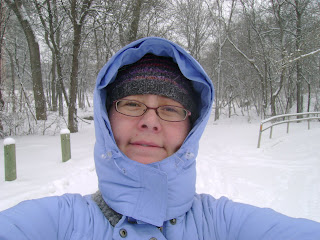 I took pity on him for a moment, but then made him get out of my bag to have his picture taken in front of the oldest curling club in Winnipeg. Curling is an adults-only sport if there ever was one – until recently, smoking and drinking were allowed on the ice. Sadly, I never got the hang of it. 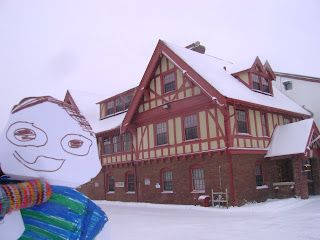 He was much more comfortable in the yarn shop. He warmed up with the Freedom Wool and Malabrigo worsted:

After my shift, we flew home, and relaxed for a bit. With wine and a smoke: 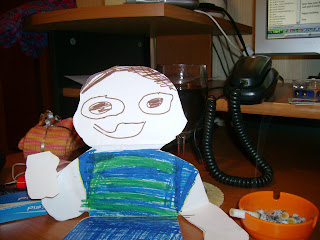 Stanley is a mooch. He was bumming smokes the whole time.

We ran into Santa: 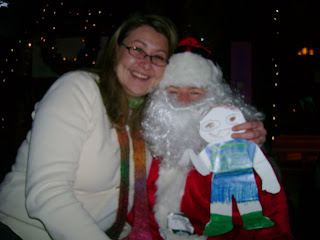 And a naughty Santa he was! He spanked me, because apparently, I have not been a good girl. Seemed to be good buds with Stan, too.

And we found some buddies: 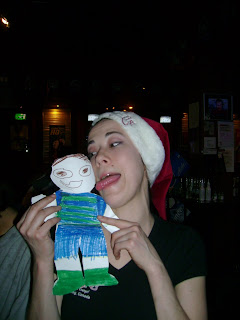 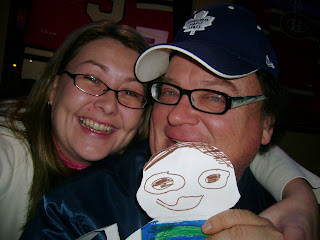 Well, Stanley and I got home about 3:30 AM, and needless to say, the two of us were useless Sunday. But, we had a wonderful time with all my peeps!
I think I need some downtime. I don’t think I can handle the pace when Stanley’s around.
Posted by Misstea at 8:23 p.m.

Oh hey, a fellow knitter that smokes.. Do you do anything special to make sure your projects don't smell like cigarette smoke?