Catching up on the house stuff

In case any of you are wondering, the carpet came up (finally) a couple of weeks ago. I was sadly discouraged with what I found underneath: 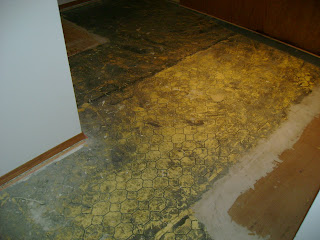 Eeww!
Yup, that's ancient linoleum, covered with nasty, filth-coloured underlay glue. There goes my plan to paint the plywood and live with it for a while. Laminate will be installed as soon as I can catch a breath and find a reputable installer.
Carpet came out like this: I yanked it up in one piece, beginning with the corner that the cats had been clawing at (at the corner of my bedroom door, on the rare occasion it was closed). Hauled it out the back door and to the dumpster, where I realized, out of doors, that it really did stink and was soaking wet (with urine. I wasn't kidding when I said I'd been living in filth). I also realized that I didn't have the strength to place it in the dumpster in one piece. So, I ran for the utility blade, just as my very nice neighbour from across the lane was taking out his garbage. My response to his "how's it goin'" was "could be better."
I saw him stand there, get a good whiff of that carpet, consider picking it up, and then (wisely) deciding not to and walk away. Haven't seen him since, and well, if his girlfriend never talked to me before, she certainly isn't going to, now (I optimistically hope that Gibson the dog will still come and visit).
I am soooo embarrassed... he must think I have filthy habits. I don't, really, I'm just oblivious to things around me when I have stuff on my mind.
So, the carpet is gone, and that's a huge relief (really, that part only took half an hour, I don't know why I dithered for so long). Now, I have to get down on my hands and knees, pull up the tack strips, staples, and scrub that linoleum until all of its yellow and gold glory shines through.
If nothing else, I feel quite validated in my belief that carpet is filthy and has no place in a house. Especially in a house where there are pets.
Posted by Misstea at 7:18 p.m.

I agree! I hate carpet. and vacuuming. Luckily, only one carpet where i live now. Its much easier to scoop up the dust bunnines in the corners on wood floors than worry about it all settling in the carpet. (Yes, I wait for dust bunnies to collect before considering cleaning the floors, i hate housecleaning!)